Kenyan Hills (and other myths) Part 2 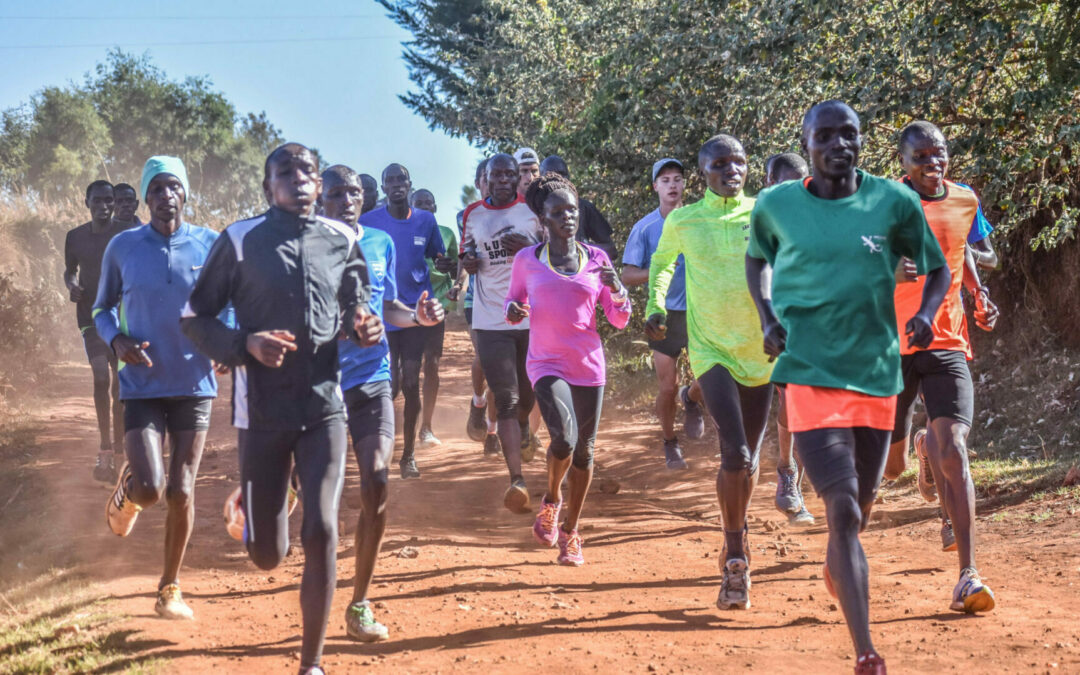 This blog looks at The Kenyan Shuffle Jog and asks if it is useful type of running for non elite runners to include in their training.

As a follow up to my previous article on Kenyan Hills I would now like to take a look at the next ‘Kenyan training myth’ I previously mentioned.

If you have been listening to The Kenyan Experience Podcast with myself, Callum and Hugo then you will have heard us discuss these myths in episode 3 and I wanted to add some additional context to that discussion here.

Last time we looked in detail at the poorly named ‘Kenyan Hills’ session. Today we will take a look at another misconception that many runners seem to have about Kenyan training, consider where it may have come from and ask what are the key take aways for you to help improve your own running.

If you missed the first article you can find it here. As an amusing aside, after writing the article on Kenyan Hills, I received a text from Coach Hugo in Kenyan saying ‘Hey, I just read your article and that is the first time I have ever heard of ‘Kenyan Hills’ – this from a man who has lived, trained and coached in Kenyan training camps in Iten for almost half his lifetime. If that doesn’t convince you of the inaccuracies of that workout then nothing will.

This article will now focus on the idea that Kenyan runners do their easy runs super slow – the so called ‘Kenyan Shuffle’. For anyone short on time here is the summarised version:

Yes, Kenyan’s do (sometimes) run slowly, very slowly in fact, but they also run 10-12 times per week and the famed super slow runs make up only a small portion of the overall training volume. If you are looking to copy certain aspects of Kenyan training then this style of running is unlikely to be your best option.

Super easy runs which have commonly taken the name of a ‘Kenyan Shuffle’ have become commonplace in many Western running cultures. ‘I’m heading our for a Kenyan Shuffle’ has been heard in many a running household in recent years. In Kenya this type of run is known as ‘Pole Pole’ pronounced very roughly as ‘Polay Polay’ meaning ‘slowly slowly’.

That Kenyan runners do runs at an exceptionally slow pace is not up for debate. They do, and it is one of the more fascinating sights for those who visit Iten for a training camp. To see world class super elites running at paces that many absolute beginners could keep up with is eye opening and thought provoking. Many western runners, this author included, actually find this type of running quite difficult, you find yourself constantly reminding yourself to slow down and sometimes, no matter how slow you try to run you find yourself pulling ahead of your Kenyan training partners. This is no way a boast, they are far far superior runners to I.

This type of run is usually performed by Kenyans as an active recovery session as the second run of the day after a more intense first session, and can also be used as a ‘wake up’ early morning session ahead of a more intense track session later in the day.

So, the argument here is not that Kenyan’s do not perform the Kenyan shuffle jog, they do, and it is well placed and also performed with merit and sound reasoning behind it.

My argument is that it is a mistake to believe that Kenyan runners do all (or even a high portion) of their easy runs at super easy ‘pole pole’ paces.

The bulk of Kenyan’s running is done at a much faster pace and the Kenyan Shuffle is used as a form of recovery rather than a direct fitness enhancer.

The reason I raise this as a potential problem is that runners can be lead to believe that ‘Kenyan’s run super slow, so should I’. That may be true if you are also running twice a day 5 or 6 days a week, but if like most of us your running volume is significantly lower, then you would be far better off doing your easy runs more closely aligned with how Kenyan’s do their main run of the day, rather than their secondary, more famous run of the day. 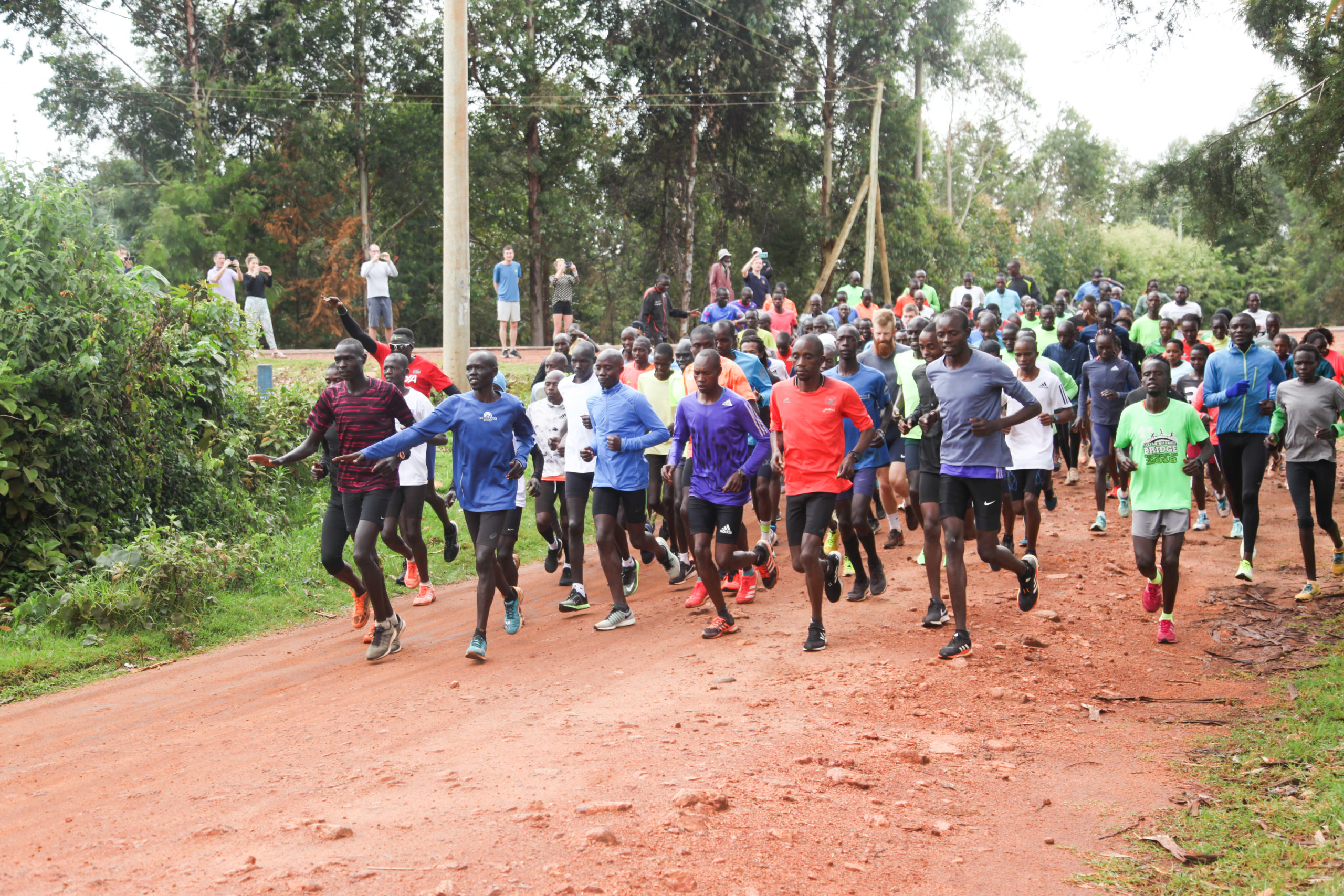 Why is the idea of the Kenyan Shuffle so popular?

I think it has spread so rapidly because anything different or out of the ordinary is somehow perceived as glamorous. Elite runners running very slowly is counter-intuitive and the natural reaction may be to think that you are ‘on to something’ if copied. Or maybe it’s simply that people see a potential way of getting faster for minimal outlay of effort (who could blame them for that?).

I have a theory, which may be wildly wrong, but is based on extensive experience of living and running in Iten Kenya, as to why the Kenyan Shuffle jog has become one of the key elements of training which has spread to Western running cultures where other (far more beneficial) aspects have not.

In Kenya, training starts early each morning. Between 6 and 6:30 AM still in darkness, runners gather in the chilly morning air across Iten to meet their training partners and start the days work.  Multiple times per week (Monday, Wednesday, Friday and Saturday) Kenyan runners will run their ‘easy and/or moderate’ runs of 15-25km at a solid pace and longer on Saturdays. More often than not these runs are done in a progressive manor, starting slowly but gradually winding up the pace right through to the end.

When I lived in Iten, these were some of my favourite runs, I would often start out with a group of local athletes and see how long I could hold on, whilst always keeping in mind that I needed to keep these runs under control as they were still the easy days of the week with a hard workout to follow. But they were certainly not ‘Kenyan shuffles’ and constituted a strong aerobic effort.

In Iten there are generally 3 training slots each day, 6am, 10am and 4pm. Almost everyone runs the first slot at 6am. This is the days main run. Then the secondary run of the day will be done at either 10am or 4pm.

So why then, is it the secondary jogging session which seems to have caught on in Western cultures rather than the far more important early morning progressive/moderate runs?

Well, because many visiting runners are still asleep whilst the Kenyans are out early, so they simply never see the faster/harder runs which take place at those times. Morning runs are done and dusted by 8am, which can be before the majority of visiting foreign runners have started training.

That is in no way a criticism of those runners. It’s cold at 6 am and usually warm and bright sunshine by 9. I fully understand why someone may wish to run in the bright sunshine, especially if it’s cold back home at that time of year, and if they have all day to train. Kenyan runners however, do start early. Therefore if you stayed in Iten even for a prolonged period, but trained each day at 9am and 5pm you could very easily miss the first run of the day entirely.

So, the myth and lesson here is not to say that Kenyan’s don’t use the famed ‘Kenyan Shuffle’. They do, and it is if anything probably even slower than most western runners realise, it’s barely above a walk. Rather, the take away lesson is avoid thinking that this type of run makes up the bulk of Kenyan runners easy days and training volume outside of hard workouts. It very definitely does not. 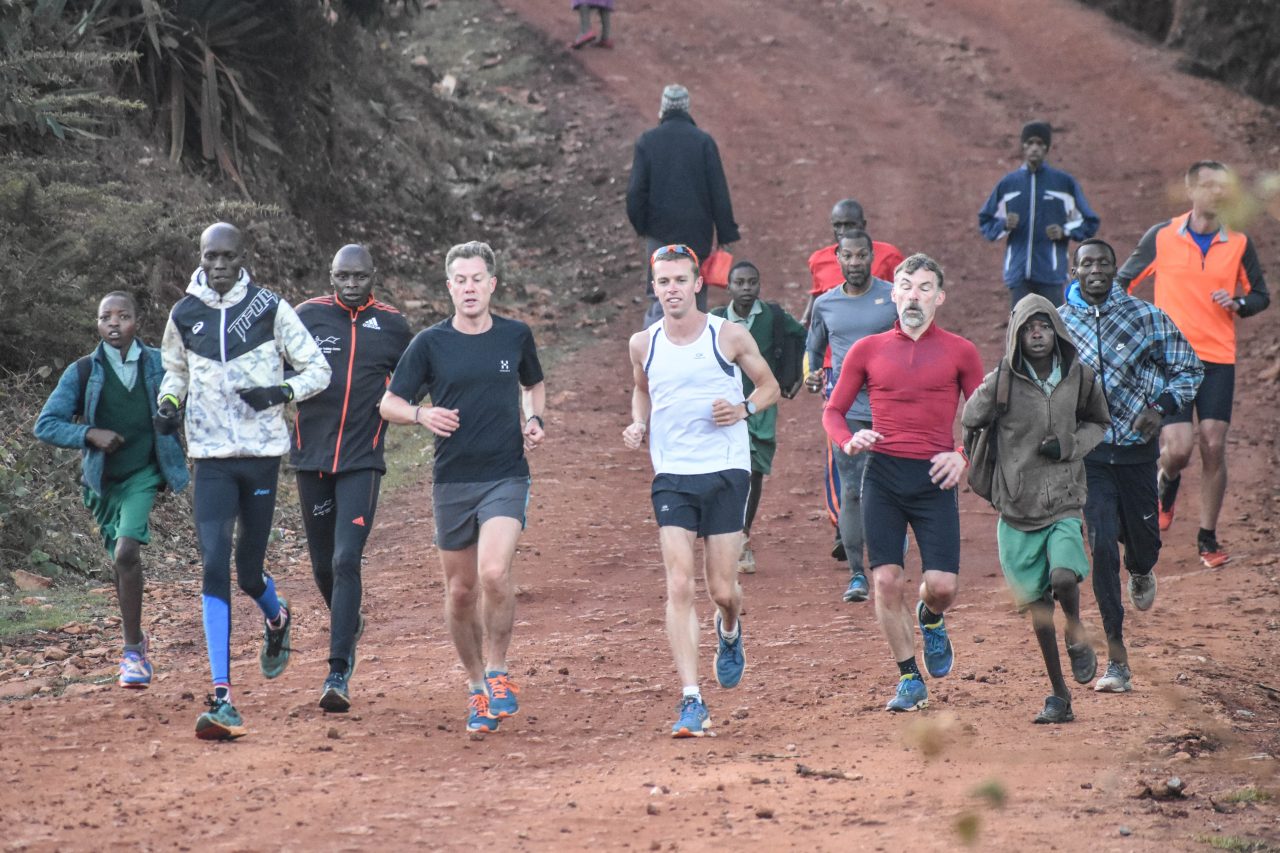 What does this mean for the causal or club runner?

If you are running twice per day, then it may make sense to utilise the Kenyan Shuffle a few times a week, especially if you have already trained hard in the morning. If, however, as is more likely the case you are running 4,5,6 times per week, then I do not believe that the Kenyan Shuffle is a suitable candidate for one of those runs. Look elsewhere for your Kenyan training inspiration such as the easy into moderate into hard progression runs.

Kenyan training, is therefore not made up of very hard days and very easy days and does in fact cover a far more broad spectrum of effort levels throughout the week. My advice would be that unless you are running twice a day, there is not room in your schedule for the Kenyan Shuffle outside of your warm up and cool down jogs for workouts.

You can rad more about effort levels and paces in Coach Hugo’s previous 2 part blog series where he looks at the 80/20 method of training.

Thanks for reading, we still have a few more Myths of Kenyan Training to explore and we will delve into another one next time round.