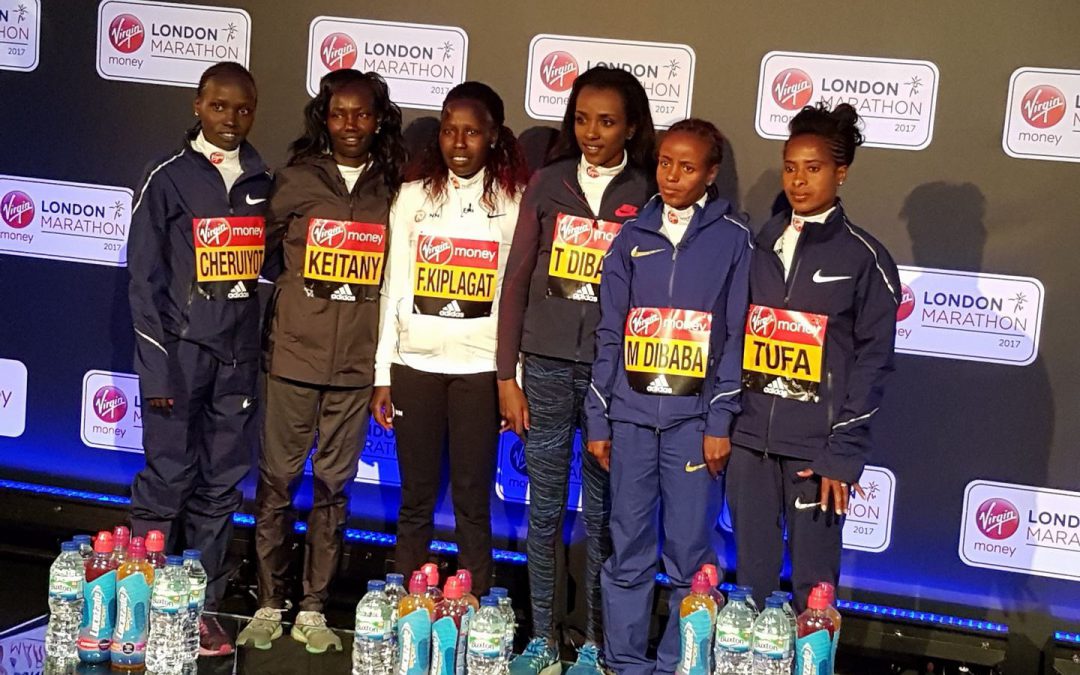 Yesterday we described the Men’s race for the 2017 Virgin Money London Marathon with almost a tinge of disappointment at who was missing.  We pointed out that this is the first in a number of years where the ‘greatest field ever assembled tag’ was not applicable.

Well, even if that is true for the Men’s race then it certainly isn’t for the Women’s where an incredible selection of star names and athletes will face off against each other tomorrow morning.

If a better women’s marathon field has existed then we are not aware of it.

Even with the disgraced Olympic Champion Jemima Sumgong withdrawn from the field it is still loaded a huge number of women who go in with a genuine aspiration to win.

Such is the depth of the field that athletes of the calibre of Helah Kiprop (2016 Tokyo winner and member of the Kenyan Olympic Team in Rio) didn’t even make the role call for the pre race photo shoot. I guess this is the result of the surplus budget left available from Kipchoge’s absence!

The favourite in many peoples eyes is Kenyan Mary Keitany. Keitany has won this race on two previous occasions and she will be looking to make it a hat-trick. She has a great record in London with last years 9th place the only sub-par performance in the British capital. Considering that she fell hard at the 22mile mark when in the lead pack you would think that she would be forgiven by the Kenyan federation and given the opportunity to make amends in the Olympics later in the year. But that was not the case and the women who would have been the favourite in Rio was instead left to watch from her home in Iten in the Great Rift Valley.

She certainly didn’t sit back and take the rest of the year off, and instead rampaged through the summer US road race season, picking up wins and course records left right and centre. She went on to end the season with a huge winning margin in New York (her 3rd title there). Her recent Half Marathon form in RAK where she finished a close second behind a World Record performance suggests she is ready to go in London.

In March Renato Canova (coach to some of Mary’s rivals in London) told us that he found it difficult to see past her for the win in London. Having witnessed her training in Iten, Renato said that he had observed a level of motivation in Mary which went above and beyond anything he had seen amongst the other top female runners.

Those who know the basic details of the typical Kenyan training system, or have run themselves amongst the great runners in Iten, will know that Kenyan runners are just as famous for their recovery jogs, often called the ‘Kenyan Shuffle’ as they are for their tough sessions. To keep things simple for those new to this idea; generally speaking, Kenyan runners train hard in the morning and then jog very slowly in the afternoon. Renato’s observation of Mary was ‘When you see a Kenyan running fast in the afternoon you can be sure that they are motivated beyond the normal level’. Although it may seem a fairly innocuous observation those who are familiar with the Kenyan mentality will understand both the significance of the action and the knowledge and experience of the man making the observation. And let us not forget that by ‘the normal level’ Canova is talking about the normal level of the best athletes in the world, not of the every day runner.

So who is Mary going to have to beat if she is indeed to win?

When Tufa ran away from her better known rivals to win the 2015 London Marathon there were more than a few surprised faces in the crowd and amongst her competitors.  Having followed up that performance with a 2nd place the following year no one should be surprised if Tufa is amongst the front runners again this time. An injury curtailed her in the Rio Olympics where she did not finish but she reports that she is back on form and we expect her to challenge for the win once again here.

A fascinating entry is Ethiopia’s Queen of the track Tirunesh Dibaba. 3time Olympic Champion and current world record holder for the 5000m.  Dibaba has run only one marathon in her career, a third place finish in 2014 in London. That represented an extremely promising debut and she was touted to go on to become a force to be reckoned with in the coming years. Instead, pregnancy and maternity leave have meant that her second marathon has had to wait until now.

She was soundly beaten by Mary Keitany in the RAK half marathon in February, but many a great Marathon performance has followed a sub par half in the build up and we expect Tirunesh to challenge for the win here.

The most exciting debut of the 2017 London Marathon is that of Vivian Cheruiyot. The women who has battled with Tirunesh Dibaba so many times on the track will now meet her over 42.2k on the roads. The four time world champion on the track added an Olympic Title to her collection when she won the 5000m in Rio last summer. Despite her pedigree, Cheruiyot has been cautious in her media appearances leading into this race expressing a respect for both the distance and the quality of her rivals. Her pre race form is solid enough however, with a sub 70 half marathon in Lisbon.

Florence has never won in London, with a 2nd place finish her best in London. The former half marathon world record holder (her record was beaten this year), has two victories a piece in both the Berlin and Chicago Marathons (including the previous 2 editions of the Chicago race) and is a former world champion at half marathon and cross country.

Florence was 3rd last year and will want to at least match that this year.

Her build up race, as in previous years has been the Barcelona Half Marathon which she again won. This year she ran 68:15 compared with her 65minute back to back world records in 2014 and 15. That could be an indication that her shape is not as good or could be a red herring and it may be that her training has been more endurance based and focused specifically on London rather than on chasing a fast time over the shorter distances.

Others to keep an eye on:

The lesser known Dibaba in the field (unrelated to Tirunesh), was Bronze medalist in the Rio Olympic Games (May yet be upgraded following Sumgong’s failed drugs test) and is a member of the highly select ‘Sub 2hr 20 Club’ with a 2hr 19:52 personal best.

Along with Florence Kiplagat, Aberu is another who won a World Marathon Major event in the second half of 2016 (all 3 winners are in this field), taking the Berlin title in 2hr 20:45.

Tokyo 2016 Champion, DNF’d in the Rio Olympics with injury

Comes in as an under dog despite having won this event in 2010 and also having finished 4th and 5th in London since then. Her best result of recent years came in Dubai in 2015 where she won. Another member of the Sub 2hr 20 club with a personal best of 2hr 19:31