My Guide to Kenyan running: A Personal Reflection 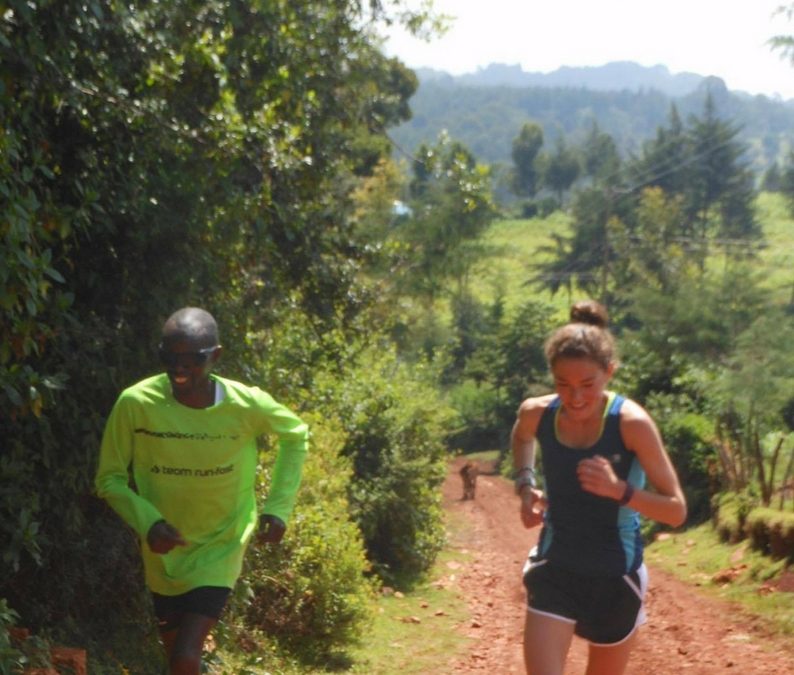 My guide to Kenyan running: A personal reflection

For an extremely simple and concise guide to Kenyan running I could just leave it at that.

But I’m aware it doesn’t make a very interesting article. Not to say it’s not true, in fact Songok would repeat it daily during my two week stay in Iten; ‘we are living like Kenyans, we run, we eat, we sleep’. However, there is of course much more depth to running in Kenya, and this is what I discovered during my Kenya Experience.

Running with the Kenyans (well, observing them, if you’re running with them you’re doing really rather well) gave me a whole new perspective on running. For starters, I was a complete novice in running twice a day; once in the morning as the sun is rising, and again in the afternoon before the sun goes down. This was an everyday occurrence while I was staying in Iten, bar Sunday which is rest day. The first run or training session is the main one, the second run being a more gentle, shorter recovery run (which Songok and our coaches emphasised was optional, but I wanted to throw myself in at the deep end). 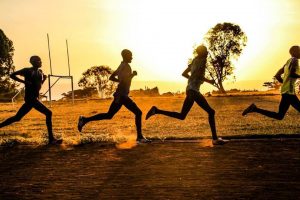 Athletes training as the sun rises in Kenya

In between these twice daily runs Kenyan’s will quite simply, eat and sleep. This is another perspective of running that I was a beginner to. The British lifestyle today leads us to believe that we should always be doing something, be it working, seeing friends, going to the gym. To sit on the sofa and not do anything is to be idle and lazy. Yet in between mugs of exceptionally sugary chai tea and plates of ugali, Kenyans will ‘chill out’; read a book, watch a film, sleep. They understand the need to rest your body, and that if you are going to be running twice a day you need that time to recover. This is something that I have taken away from Iten. I now see putting my feet up and having a cup of tea as part and parcel of my training – not something I need to feel guilty about!

Another aspect of Kenyan running I witnessed while in Iten was the way in which the Kenyan’s recognise and appreciate their body’s as the most important tool to them. I remember on the first run I did in Kenya, and being confused as to why we were running so slowly. Fast forward 40 minutes or so and I was no longer confused! Whilst I was worried that my splits on my watch would be slower than normal, bringing my average pace down, as far as I could see none of the Kenyans on the trails were wearing watches. Instead, they begin their runs slowly to let their muscles warm up and by doing so, steadily increase their running pace. This is a quality of Kenyan running I have adhered to since. I no longer take my watch or iPod out with me on long runs, but instead listen to my body and progress my speed gradually.

A final point on this guide to Kenyan running is that the athletes will always train and run as a group. Never once did I see a lone Kenyan running on the trails of Iten. For me, the essence of this was captured every morning watching groups of Kenyans running in the morning haze, the sun rising and the red dirt roads almost glowing. A truly magical spectacle and one I shall never forget. Or on a Thursday morning, when all the athletes in Iten gather together for Fartlek training. Choosing to watch this training session rather than join in, I witnessed the stampede of hundreds of athletes as they began their hilly fartlek throughout Iten. Even during speed workouts at Kamariny track the athletes would be in it together. You rarely see an athlete overtake another. They run as a group and at the pace of the front runner, they understand that training and racing are separate. Again, this is another view of running I would never have considered before. For me, I would always try and be the best on the track, always try and overtake the runner in front. So to see the way that the Kenyans train in a group was something very inspiring to me. 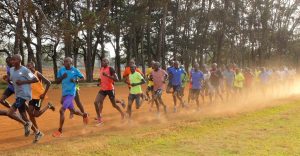 Athletes in training in Kenya

There is no doubt that the way Kenyan’s train is producing some serious outcomes both for themselves and those who have been fortunate enough to watch them in action. I learnt lots about running while I was in Iten, and much of it I have taken back home and applied to my own training. Apart from Ugali, I’ve left that behind in Kenya but we can leave that one for next time.

Alice Reed is a runner from the UK. She attended the Kenya Experience 2016 Running with the Kenyans camp and has been fascinated by Kenyan runners ever since. Alice runs all distances from 1500 to Half Marathon where she has a personal best of 1hr 22. 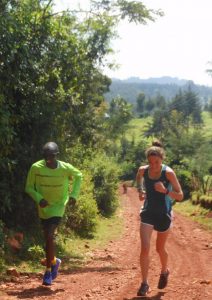 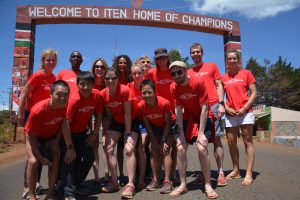